While on holiday in Australia this year our Instagram feed was blown up by Eli Dangerfield who uses fast cars and luxury apartments to show you how much money he's making from eCommerce. Most of these ads have a 'DM eCom' if you're interested to learn more.

So what happens when you actually DM him to learn more? And what do you actually get from Eli Dangerfield and his associates? What's he selling and is it worth the money or is it a scam?

His course is called Six Figure Brand Accelerator, and it claims to be a mentorship on how to start a successful eCommerce business.

A lot of the material/screenshots provided below was obtained from this Youtube video, "A warning about Eli Dangerfields Course. Credit to this uploader.

However judging by the numerous reviews out there, it's a training course with some powerpoint slides and a step by step setup manual. You can get similar information for free on Youtube.

Who is Eli Dangerfield?

Eli is a young 21-22 entrepreneur from Craigburn, Adelaide, South Australia. From public records we can see that he has one business under his wings called Elmore Lewis Watches, however this was only officially registered in June 2020, but has been in operation since 2016-2017.

A 2019 screenshot claims that Elmore Lewis was featured in Forbes and The Huffington Post but I couldn't find a single article confirming this.

A Daily Mail article published in February 2020 claims Eli had a multi million dollar empire through eCommerce. Upon further research I was unable to find any other stores he owns so one can only assume this is in relation to his watch business.

Elmore Lewis sells imitation watches from the likes of Daniel Wellington, under his brand Elmore Lewis. Take a look at this image someone recently posted to Youtube. Look identicaly right?

Additionally he used Instagram Influencers photos, and photoshopped his own watches into those photos. Here's one from Paul Hewitt, look at the same hand.

As you can see below, Debi Flue was one of these who had her photos ripped and clearly says she does not work with them. This was a paid partnership Debi had, and whoever was running Eli's Instagram page for his store ripped those photos and used them for their own advantage.

Eli claims that he went from poverty to riches, but these claims don't stack up. In one of his 'ask me a question videos' on Instagram he told everyone he went to Concordia school in Adelaide. This just so happens to be a private fee paying school. State schools are free in Australia.

Eli Dangerfield claims that his family was living below the National Australian poverty line growing up in his Blueprint course, but this claim is unlikely.

Who is Teddy Briggs?

Teddy is one of the main promoters of Eli Dangerfields course. He lives in Adelaide and was featured on Love Island Australia. He claims he was broke after the show and had to get a day job. This article was published in March 2020, claimed he was now making $75-82k a month.

We couldn't find any eCommerce stores that Teddy owns.

He regularly posts about this $110k dream Mercedes with the ECOM number plate, that he paid for in cash...drum roll... 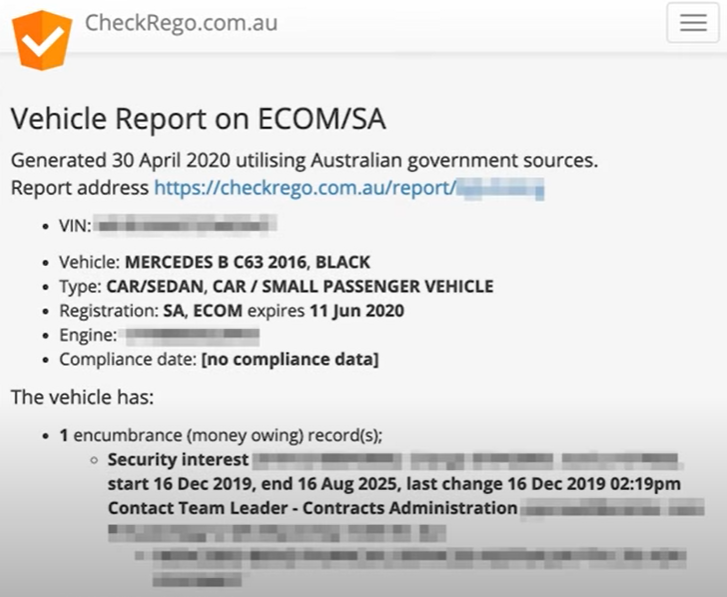 The course is split into two parts. There's the Blueprint starter course which is 3 hours of training with Eli and Teddy, this is followed by an upsell to the full course.

All training is done through the Clickfunnels membership platform.

The first blueprint you have to buy is a 3 hour training where Eli is flexing his cash and telling you all about his life and how successful he is. Teddy Briggs is also in this training but he basically screams into the microphone from the other side of the room which his hands round his mouth, very professional!

You can probably find the same information on Youtube for free...However you're invited to apply for their full training which costs $697 USD, which is roughly $1,000 AUD to most Australians.

One of the Facebook strategies taught in this first course is the 1:5:9 split testing model. Eli Dangerfield claims his course is the only place you can find this "secret strategy" but this is a fairly common model taught by dozens of Youtubers..for free.

One of these methods is from a guy called Kingpinning, which is actually a big Facebook group. They are very similar in the process explained.

So what exactly is the Six Figure Brand Accelerator?

Eli values his course at $9590. Which he offers for only $697 upgrade. Remember you've already paid the cost of the Blueprint so your total spend is around $1000-$1100 for the training.

This works out to be around $1,500 AUD for those living in Australia where most of his students seem to come from. Exchange rates subject to change.

The training is not actually that long and only goes into 6 modules which cover these topics:

One of the main issues I see is that anyone who requests a refund is either ghosted or simply ignored. Take this lady here, who wanted Teddy Briggs to respond in writing, when in actual fact he kept sending voice clips, presumably so if it went to the small claims court he could say that's not his voice.

I suggest you read the terms and conditions of this course very carefully. It blatantly says no refunds, so you're in effect agreeing to no refund, even if you wanted one.

Most genuine courses have real money back guarantees like 30 days. I can only assume either they are so confident you won't like the course and want a refund so they stop you, or they simply couldn't care less about whether you get any value from their training or not.

Eli's course has lots of testimonials but as he points out in his terms and conditions he doesn't verify the authenticty or accuracy of these, so how many are actually true?

I guess we'll never know. We do know that many other people promoting Six Figure Brand Accelerator have their own luxury cars, which they claim were purchased from their eCommerce success.

As you'll see in the video below, all of these are on 6-7 year finance purchases for cars that are 2014-2016. If you're making $1 million dollars a year, why would you get a poor mans Mercedes?

There is too many flaws with this training and course. Plus the over the top claims that are either full of shit or unsubstantiated by Eli. There are so many negative reviews about this course on platforms such as ProductReview, Facebook and Youtube.

You can be successful with eCommerce, but you will not be a millionaire this year. Plus you can't follow someones action plan and get guaranteed results. You are being sold a dream of luxury, fast cars and penthouses, beach holidays and private jets.

You actually need to do the work and be different. You can find guidance on the same content taught in Eli's course either for free online, or by choosing a budget friendly course that will cost you $197, and won't use luxury photos to promote the course.

One such course is eCom Elites by Franklin Hatchett. I suggest you look at the sales page for that course and consider the differences. No fast cars, no luxury apartments, no private jets, no false promises, no leased Mercedes. I used this course and it was a great start for my eCommerce store.

But whatever you do, don't steal someones photos, don't sell fake rebranded watches and don't buy a car on 6 years worth of finance when you make your first sale!